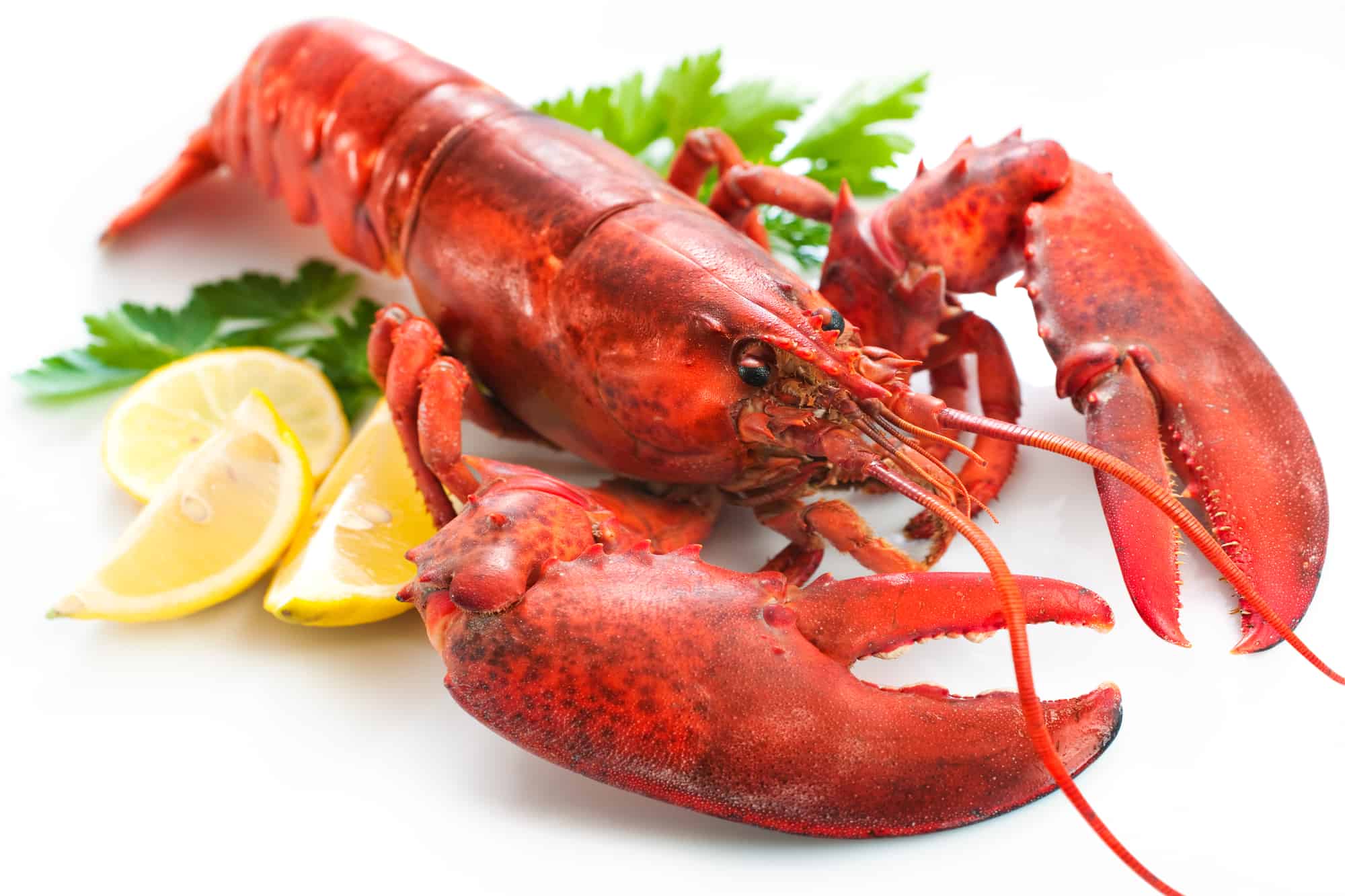 If you’ve never eaten lobster, you’re in for a real treat the first time you try this delicious food! These sea creatures produce delicious lean meat that’ll make your mouth water! In this article, I’ll answer the question, “What does lobster taste like?” and how to try it for the first time!

So what does lobster taste like? You see, this shellfish is one of my favorite foods in the world, and in this article, I’ll do my best to answer your question. So, let’s dive in, shall we?

Once you’ve tasted lobster, just thinking about it will make your mouth water. It’s ten o’clock in the morning and I could enjoy lobster meat right now! Seriously! This is one of my favorite types of seafood. Just give me some steamed lobster, plenty of clarified melted butter, and leave me alone!

Lobster is a seafood delicacy that has been enjoyed for centuries. Plus, there are tons of ways to serve this tasty treat – from classic boiled lobster served with drawn butter for us purists to grilled lobster topped with garlic butter sauce and lemon wedges, as a sandwich known as a lobster roll or the truly decadent lobster thermidor. Your possibilities are endless!

The taste of lobster meat is unlike anything else – its sweet taste and succulent meat melts in your mouth. It does not have a fishy taste or fishy flavor but has a mildly salty, ocean-like taste (brininess). Lobster tastes like a meatier and sweeter version of crab or shrimp. The spongy texture falls somewhere between the firm, chewiness of giant shrimp and the flakiness of crab meat, depending on which part of the lobster you are eating.

What Is A Lobster?

Lobsters are a family of large marine crustaceans that live up to an estimated 50 years in the wild.

They can be found in all oceans, and generally live by themselves in crevices or under rocks in a variety of ocean bottoms.

Lobsters are omnivores that walk around the seafloor but scurry backward using their tails when fleeing the scene. This is known as the cardioid escape reaction.

Lobsters come in a variety of colors although many will never have the privilege of seeing the rare colors.

Once cooked, a lobster’s shell turns a bright reddish-orange color.

American lobsters are found on the east coast of the U.S., generally from Maine to North Carolina.

When referring to marine animals, shellfish are comprised of two categories – crustaceans and mollusks. Lobsters are considered crustaceans.

Why Is Lobster So Expensive?

In the U.S., the majority of the lobsters are found in the cool Atlantic waters from Maine down to New Jersey.

The freshest lobsters in the U.S. are delivered live. Because lobsters are usually caught live with traps and can’t be easily raised on farms, there are many steps along the path from the seafloor to your local restaurant or grocery store.

Each person involved in bringing lobster to your plate must be paid. This causes the price to increase each time the lobster is transferred from vendor to vendor.

How Much Does A Live Lobster Cost?

In many places, it is not uncommon for a live lobster to set you back $30 to $40 a pound. I found two high-end grocery stores in my town here in SC that carry live lobsters.

One of the stores had lobsters weighing around 1 to 1.5 pounds for $23.99 a pound. The other store had live ones around the same weight for only $15.99 a pound.

Is Lobster Good For You?

Besides tasting absolutely delicious, lobster is high in protein and low in calories making it a perfect lean protein source.

It’s high in omega-3 fatty acids (EPA and DHA) and is a great source of selenium and copper.

Lobster is relatively high in cholesterol compared to many foods. But it’s not as bad as it sounds. A serving of lobster has less cholesterol than an egg.

What Parts Of A Lobster Can You Eat?

While many parts of a lobster are edible, the tail and the claws are by far the most popular edible meat but you can also find meat in the head and rib area between the shells of the body.

Lobster claws contain the most tender meat while the tails are by far the meatiest part of the lobster. Which is better? I love the taste of both.

Some people (NOT ME) will also eat the tomalley. It’s a delicacy to some. Tomalley is the green substance you find within a whole lobster. Tomalley functions in a lobster much like the pancreas and liver do in us.

If you have a female lobster, it may also contain roe (eggs). If the roe is red, they are cooked and safe to consume. If they are black, do not eat them until they are properly cooked.

How To Cook Lobster?

This shellfish can be boiled, steams, broiled, grilled, or baked. You can even saute it on the stovetop or cook it on a flattop. To add flavor, try adding Old Bay seafood seasoning to your cooking liquid!

How Long Does Lobster Meat Last?

Fresh lobster meat lasts only a few hours but once cooked it will last three maybe four days if stored properly in the fridge at or below 40°F.

You can often find frozen tails in many grocery stores. While not as good as fresh lobster, frozen lobster tails are delicious!

Besides boiling, steaming, or grilling lobster, it is also used successfully in a variety of dishes. Some of the more popular ones are:

What Goes Well With Lobster?

There are many delicious side dishes you can serve with lobster. Here is a list of side dishes typically served with this seafood:

When trying lobster for the first time, be sure to serve it with your favorite side dish (or two) just in case you don’t like the unique flavor of lobster.

Do You Boil Lobsters Alive?

Lobsters need to be kept alive until they are cooked because lobster meat spoils quickly. While some people will toss a live lobster into a pot, others will put the it into a freezer for 15 minutes prior to boiling it.

Lobster tails are chewier and a little firmer than other parts of the lobster meat. This is likely due to the muscle fibers in the tail.

The taste of lobster tails is a cross between large shrimp and crab. It’s meaty with a salty, sweet taste.

Does lobster taste like crab? No. The taste of lobster is unique. Lobsters don’t taste like crab but have a similar flavor profile and texture. Lobster tends to be meatier and sweeter tasting than crab.

However, if you like crab legs, you’ll likely love lobster meat.

Crawfish aren’t as salty tasting as lobster but are generally somewhat sweeter. Their flavor profile is similar to lobster, crab, and shrimp.

Does Lobster Always Have A Sweet Flavor?

Can You Eat Lobster If You Have A Shellfish Allergy?

If you have a shell fish allery, you should ALWAYS consult with your physician BEFORE trying any new food. That includes lobster!

When Is The Best Time To Buy Lobster?

Here in North America, over half of the lobsters come from Cananda. Lobsters actually have two seasons. The first being April, May and June with the second being October, November, and December.

Lobsters are not caught during July, August, or September. This is the season when a lobster will shed its hard shell so it can grow. It is during this time, lobster shells are soft. This makes them difficult to transport so they are not commercially trapped during their molting season.

First of all, if you like seafood and other crustaceans like crab or you enjoy scallops, you’ll likely enjoy lobsters taste. With that said, purchasing, storing, and cooking a live lobster is a daunting endeavor that’ll cost you a few bucks!

In addition to the cash outlay, you’ll have to put in some serious effort into your home cooked lobster dinner.

First of all, you’ll need to decide on the type of lobster you’ll try. Will you try a whole maine lobster or frozen tails?

Then, you’ll need to decide on your cooking method. Will you have fried lobster or something a bit lighter? Will you drop your lobster in boiling water or steam it?

Next, you’ll need to decide on what side dish or dishes you’ll serve.

And after all those decisions, you’ll have to buy the lobster from the market and store it until it’s time to prepare it. That’s just what you’ll need to do before you start cooking.

Then, you’ll need to cook your meal and clean up after you’ve eaten it. All this work for a food you may or may not like.

Instead, wouldn’t you rather spend a few more bucks so you can enjoy a meal out and have your lobster prepared by experienced chefs? I know I would. Here’s what I found in my area.

As of today, the cheapest per pound price I could find on live lobster is $15.99 a pound but our local Red Lobster is currently running several specials which interest me that include lobster.

For example, on Wednesdays, they have a surf n’ turf combo that includes a 7-ounce sirloin and a lobster tail served with cheddar biscuits and two sides for $19.99.

And on Tuesdays, they have a two-for-dinner special for $49.99 that includes other seafood like salmon, shrimp, and a lobster tail. It also comes with two sides and cheddar biscuits.

So as you can see, I could spend $15.99 a pound for a live lobster, bring it home, cook it, and then clean up my mess. Or, I could drive over to my local Red Lobster and enjoy a steak and lobster meal for $19.99. For me, that’s a no-brainer!

When you’re looking to try lobster for the first time, look for a lobster tail. Trust me, you don’t want to mess with a whole lobster unless you know you’ll like it.

If possible, find a meal that includes other foods you know you like. That way, if you don’t like the lobster tail, you haven’t lost that much money because you will enjoy the rest of your meal.

Also, remember this…if your lobster tail is extremely tough and chewy, make sure to let the manager at the restaurant know the lobster was overcooked. The bottom line is you always want to eat the best tasting lobster your money can buy, especially your first time trying it.

Or, if you’re cost-conscious and love soups, you could always try a bowl of lobster bisque, lobster mac and cheese, or a lobster roll at your local seafood establishment. These lobster dishes will still give you plenty of lobster flavor and should cost you less than a lobster tail or two!