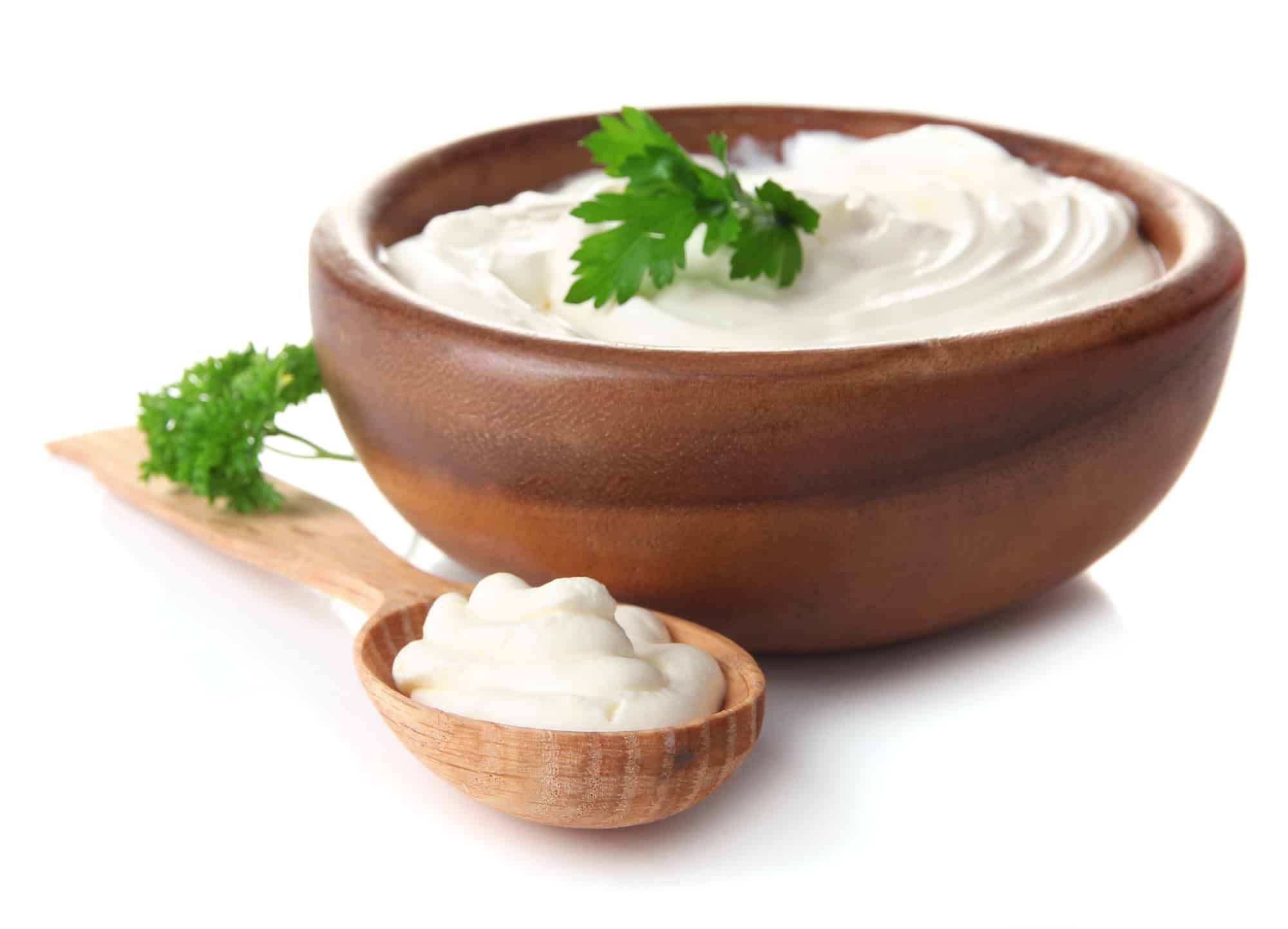 Dairy products can get expensive so you want to consume everything you buy. But when you’re faced with using or tossing it, can you freeze sour cream?

Sour cream is an excellent addition to many recipes, including:

Fresh sour cream can be used to make a creamy sauce, whipped up into fluffy cream cheese frosting, used as a base for a savory dip, or added directly to potatoes for an extra creamy touch. Sour cream is also great for masking the taste of a strong-tasting vegetable, like eggplant or beets.

Because of its versatility in the kitchen, it’s a good idea to keep it on hand. But what do you do if you’ve bought too much and it’s about to expire?

The answer is simple. You can use it up quickly or freeze it. But does sour cream freeze well? Will the quality be good? Is it worth it? Keep reading to find out what to expect when using frozen sour cream.

What Is Sour Cream?

Sour cream is a dairy product that is thick and somewhat tart. It’s made by fermenting dairy cream with specific lactic acid bacteria.

Specifically, a lactic acid culture is combined with regular cream and then “soured.” Souring is the process used to make sour cream.

This dairy product has the following varieties: full-fat, low-fat or light, and nonfat or fat-free.

The light varieties of sour cream have less fat because they are made from half and half instead of cream.

Nonfat or fat-free sour cream is made with skim milk but has additional additives to stabilize it and give it that familiar smooth texture.

How To Store Sour Cream In The Fridge

Sour cream should be stored in the fridge at or below 40°F to avoid bacteria growth.

How Long Does Sour Cream Last?

Generally speaking, dairy products like sour cream have a relatively short shelf life. Commercially made sour cream will have a “best by,” “use by,” or expiration date printed on the container.

If stored properly, sour cream can last up to a week after the date printed on the container.

Tip: If your sour cream smells off or has developed signs of mold, it has gone bad and should be discarded.

Can You Freeze Sour Cream?

Yes, you can freeze sour cream, but your use will be limited due to texture changes once thawed. You can successfully keep sour cream frozen in the freezer for up to six months in an airtight container.

How To Freeze Sour Cream

You can freeze sour cream in its original container in the freezer, but I don’t. The containers aren’t freezer-safe. They can crack, and your sour cream, like other dairy products, could pick up off-odors from the freezer.

When you have an excess of leftover sour cream, you have two options: freeze it for optimal quality or use it up quickly to avoid freezing it (more on that later).

If you opt for freezing sour cream, the equipment needed will vary depending on the freezing process you choose. Here’s what you may need.

How To Freeze Sour Cream In An Ice Cube Tray:

As we previously discussed, sour cream undergoes massive texture changes once frozen, so your best option is to use it in cooked dishes once thawed.

Because of this, my go-to way to freeze sour cream (when I have to) is in ice cube trays rather than large containers.

When you freeze sour cream in ice cube trays, you can pull out one or two cubes at a time and toss them into your hot dish. There is no need to thaw the entire batch and then worry about “using up” your thawed sour cream within a day or so.

Tip: You can skip the labels and write directly on your plastic bag. Just be sure to do it before adding the sour cream. Sharpies don’t like to write on anything damp!

The good news is that you don’t have to open an unopened container of sour cream to freeze it. Instead, you can freeze your sour cream in its original container by following the below steps.

Note: You don’t have to place the unopened container into a freezer-safe plastic bag. But doing so will help keep odors away from your sour cream. Because the sour cream is in a container, you can reuse the plastic bag once you’ve given it a good wash with warm, soapy water.

Once your sour cream is opened, you can freeze it in its original container or move it to a new container. Here’s how to do it.

How To Defrost Sour Cream

The safest way to defrost sour cream is to thaw overnight in the refrigerator. Never thaw sour cream on the counter, as this promotes bacteria development. Learn more about microwaving sour cream.

How To Use Frozen And Thawed Sour Cream

As I mentioned earlier, previously frozen and thawed sour cream doesn’t have the same creamy texture as fresh. But that doesn’t mean it can’t be used successfully in certain dishes once thawed. Here’s a list of the best ways to use up previously frozen sour cream.

The nice thing about using frozen sour cream cubes in soups and stews is that you don’t have to thaw it first. Simply toss in a cube or two and let the heat from the dish do the thawing for you. Be sure to stir your soup or stew until the cubes are completely melted.

Many baking recipes call for sour cream. For these, it’s best to use defrosted sour cream in the recipes. Just stir the sour cream thoroughly before adding it to the recipes.

Another great way to use thawed sour cream is in casseroles to another level of creaminess to your dish!

Be sure you thoroughly stir your previously frozen sour cream before adding it to your taters.

Previously frozen sour cream can also be used successfully in pancake recipes. Just be sure you thaw and stir it before adding it to your pancakes.

How Not To Use Thawed Sour Cream

Thawed sour cream is perfectly safe to eat even though it develops a watery and grainy texture. You should always give it a good stir once thawed. With that said, previously frozen sour cream will never have the same smooth consistency that fresh sour cream has. So avoid using it in the following dishes:

How Do You Revive Frozen Sour Cream?

Once your sour cream thaws, you’ll notice some separation. This is normal. Simply stir the sour cream to revive it as much as possible. If stirring it isn’t doing the trick for me, I whip out my electric hand mixer.

How To Thicken Frozen Sour Cream

Once thawed, sour cream separates and becomes runny. The best thing to do is stir or whip it with a hand mixer to thicken it back up as much as possible. You could also toss in a bit of corn starch when mixing it to help thicken it.

To be safe, use thawed sour cream within one or two days after the thawing process. Remember, you froze it to keep it from going bad, so you’ll want to use it within 1 or 2 days at most.

Can You Freeze Daisy Sour Cream?

According to their website, the manufacturers of Daisy sour cream do not recommend freezing it unless it is frozen in a prepared dish. This is because there are textural and sometimes flavor changes, and they want their product to be of optimal quality.

However, it is perfectly fine to freeze Daisy sour cream.

Can You Refreeze Sour Cream?

Sour cream can develop bacteria quickly, so it is best not to refreeze sour cream.

What Can I Do With Extra Sour Cream?

There are many ways to use up extra sour cream. Here are a few of my favorites.

Can You Eat Sour Cream Left Out On The Counter?

Can You Freeze Sour Cream Dip?

My family and I enjoy sour cream so much that we rarely find ourselves in a situation where we can’t consume it all before it goes bad.

It’s one of those foods I do my absolute best to avoid freezing. Instead, I would rather prepare a specific recipe where I could use up excess sour cream rather than freeze it.

But on those rare occasions when I must freeze sour cream, I prefer to freeze it in smaller portions like ice cube trays so I can drop a cube or two into whatever dish I am making.

While you’re here, please check out our article on microwaving sour cream.